The biological basis of human aging remains one of the greatest unanswered scientific questions. Increasing evidence, however, points to a role for alterations in mitochondrial function as a potential central regulator of the aging process. Here, we focus primarily on three aspects of mitochondrial biology that link this ancient organelle to how and why we age. In particular, we discuss the role of mitochondria in regulating the innate immune system, the mechanisms linking mitochondrial quality control to age-dependent pathology, and the possibility that mitochondrial-to-nuclear signaling might regulate the rate of aging.

Immune activation by mtDNA release through both intracellular and extracellular pathways. 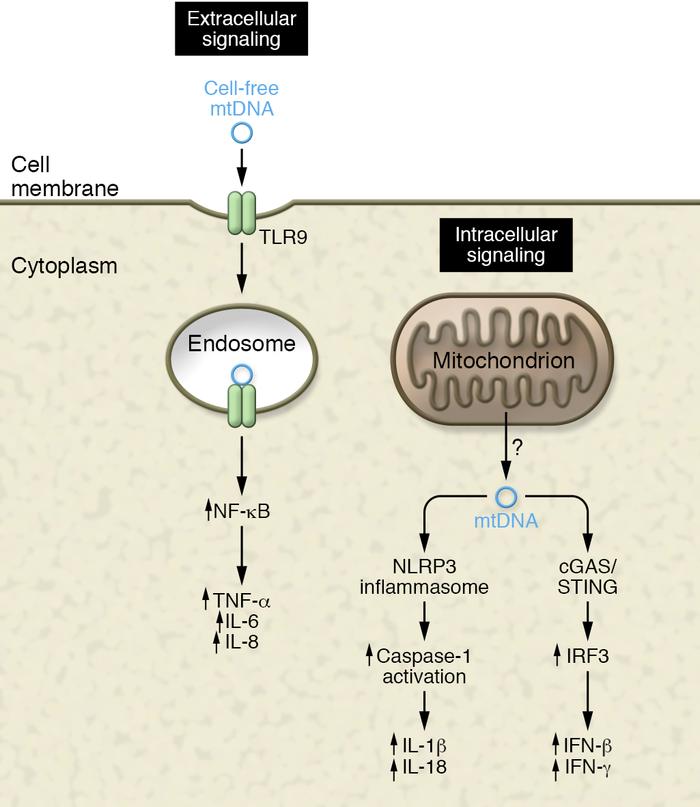 The innate immune system has at least three sensors for detecting mtDNA: TLR9 for sensing circulating (extracellular) mtDNA, and the NLRP3 inflammasome and the cGAS/STING pathway for sensing cytoplasmic (intracellular) mtDNA release. A host of downstream signaling pathways and cytokines are induced following activation of each of these distinct pathways. The precise mechanism through which mtDNA is released into the cytosol or the circulation remains uncertain.