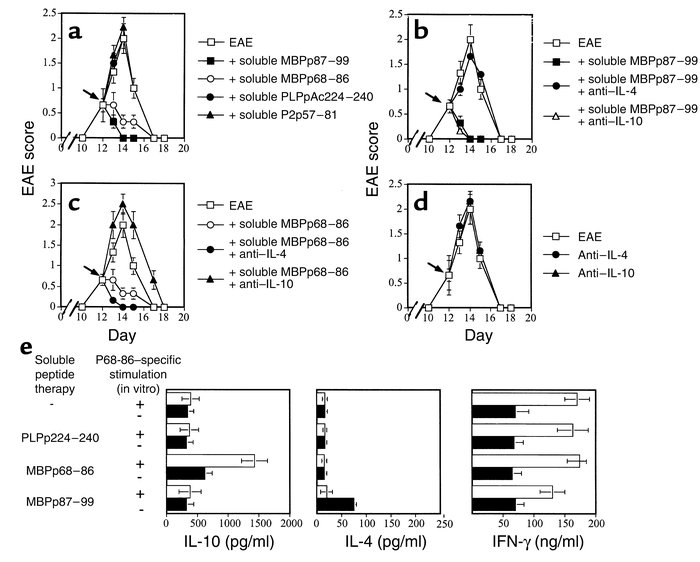 () Groups of nine Lewis rats were immunized with MBPp87–99/CFA to induce active EAE. Just after the onset of disease (day 11) these rats were subjected to soluble peptide administration of MBPp87–99, MBPp68–86, PLPpAc224–240, or P2 (P2p57–81). Repeated administrations were given in a 12-hour interval during the subsequent 24 hours, and monitoring was done for clinical signs of disease (). On day 11 following the first peptide administration, some of the groups that were subjected to soluble peptide therapy with MBPp87–99 () or MBPp68–86 () were also administered with neutralizing Ab’s to IL-4 or IL-10. () The kinetics of disease in rats that were administered with each of the above Ab’s without soluble peptide therapy. Mean EAE score ± SE of six rats per group is shown. Either normal rabbit IgG or affinity-purified polyclonal Ab’s from preimmunized rabbits were used as control Ab’s to anti–IL-4 and anti–IL-10. Their administration had no effect on the manifestation of disease, or on the suppressive effect of either soluble MBPp68–86 or MBPp87–99. () Levels of IL-10, IL-4, and IFN-γ obtained during the response to the spread determinant in spleen cells of rats that were subjected to active EAE induced by p87–99/CFA and subjected to soluble peptide therapy with various epitopes as described above. Spleen cells were obtained 24 hours after soluble peptide therapy was administered. Results are shown as mean of triplicates ± SE.