The availability of mice lacking the mitochondrial uncoupling protein UCP1, has provided an opportunity to analyze the relationship between the capacity for energy expenditure and the development of obesity in response to a high-fat, high-sucrose diet. Congenic UCP1-deficient mice on a C57BL/6J genetic background show a temperature-dependent resistance to diet-induced obesity when compared with wild-type mice. This resistance, which occurs at 20°C, is quickly reversed when the ambient temperature is increased to 27°C. At 20°C, total oxygen consumption and physical activity of mutant and wild-type mice are indistinguishable; however, body temperature is higher in UCP1-deficient mice by 0.1–0.3°C, and respiratory quotient is slightly reduced. A reduced respiratory quotient, together with elevated β-hydroxybutyrate and reduced plasma fatty acid levels, suggests that the mutants oxidize a greater proportion of fat than wild-type mice, and that this possibly accounts for the resistance to diet-induced obesity. Although shivering is one alternative mechanism of thermogenesis that is probably used in UCP1-deficient mice, whether there are others remains to be determined. Nevertheless, our study underscores the paradox that elimination of the major thermogenic mechanism in the animal reduces rather than increases metabolic efficiency. We propose that in the absence of nonshivering thermogenesis, alternative, calorically more costly pathways of metabolism must be used to maintain body temperature. 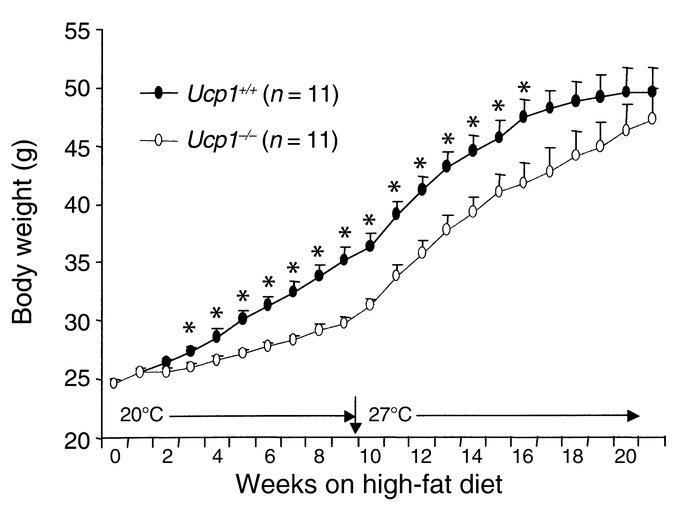