In the current studies we generated transgenic mice that overexpress human Insig-1 in the liver under a constitutive promoter. In cultured cells Insig-1 and Insig-2 have been shown to block lipid synthesis in a cholesterol-dependent fashion by inhibiting proteolytic processing of sterol regulatory element–binding proteins (SREBPs), membrane-bound transcription factors that activate lipid synthesis. Insig’s exert this action in the ER by binding SREBP cleavage-activating protein (SCAP) and preventing it from escorting SREBPs to the Golgi apparatus where the SREBPs are processed to their active forms. In the livers of Insig-1 transgenic mice, the content of all nuclear SREBPs (nSREBPs) was reduced and declined further upon feeding of dietary cholesterol. The nuclear content of the insulin-induced SREBP isoform, SREBP-1c, failed to increase to a normal extent upon refeeding on a high-carbohydrate diet. The nSREBP deficiency produced a marked reduction in the levels of mRNAs encoding enzymes required for synthesis of cholesterol, fatty acids, and triglycerides. Plasma cholesterol levels were strongly reduced, and plasma triglycerides did not exhibit their normal rise after refeeding. These results provide in vivo support for the hypothesis that nSREBPs are essential for high levels of lipid synthesis in the liver and indicate that Insig’s modulate nSREBP levels by binding and retaining SCAP in the ER. 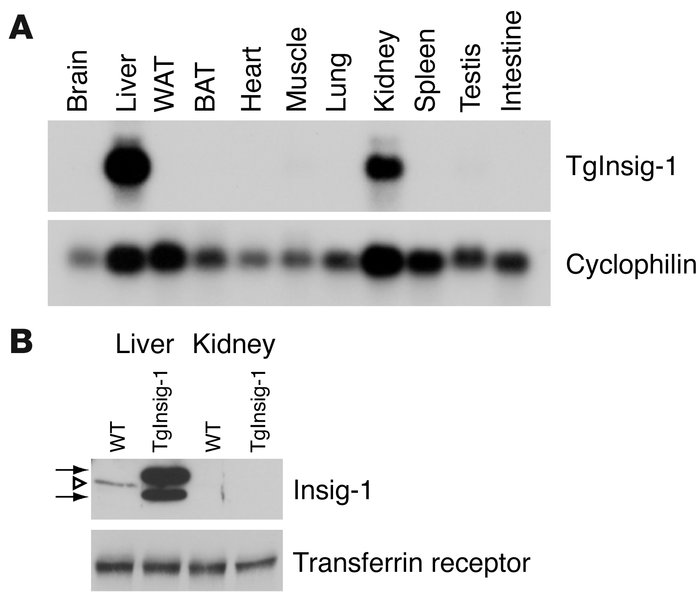 Transgene expression in TgInsig-1 mice. (A) Tissue distribution of human Insig-1 transgene mRNA. Total RNA was extracted from tissues of transgenic mice consuming a chow diet. A total of 20 μg of RNA was subjected to electrophoresis and blot hybridization with 32P-labeled cDNA probes for human Insig-1 and mouse cyclophilin. After stringent washing, the membranes were exposed to Kodak X-Omat Blue XB-1 films for 4–12 hours at –80°C. (B) Immunoblot analysis of endogenous mouse Insig-1 and transgenic human Insig-1 from the livers and kidneys of WT and TgInsig-1 mice, respectively. Membrane fractions from five WT and five TgInsig-1 mice (same as those described in Table ) were prepared and pooled as described in Methods. Aliquots of the pooled membrane fraction (45 μg protein) were subjected to SDS-PAGE and immunoblot analysis as described in Methods. Filters were exposed to Kodak X-Omat Blue XB-1 film for 15 seconds at room temperature. Open triangle denotes endogenous mouse Insig-1 (28 kDa); arrows denote transgenic human Insig-1 (doublet of 30 kDa and 26 kDa). Immunoblot of transferrin receptor served as a loading control. WAT, white adipose tissue; BAT, brown adipose tissue.