IL-22–mediated induction of a series of Muc expressions in CECs through STAT3 activation. 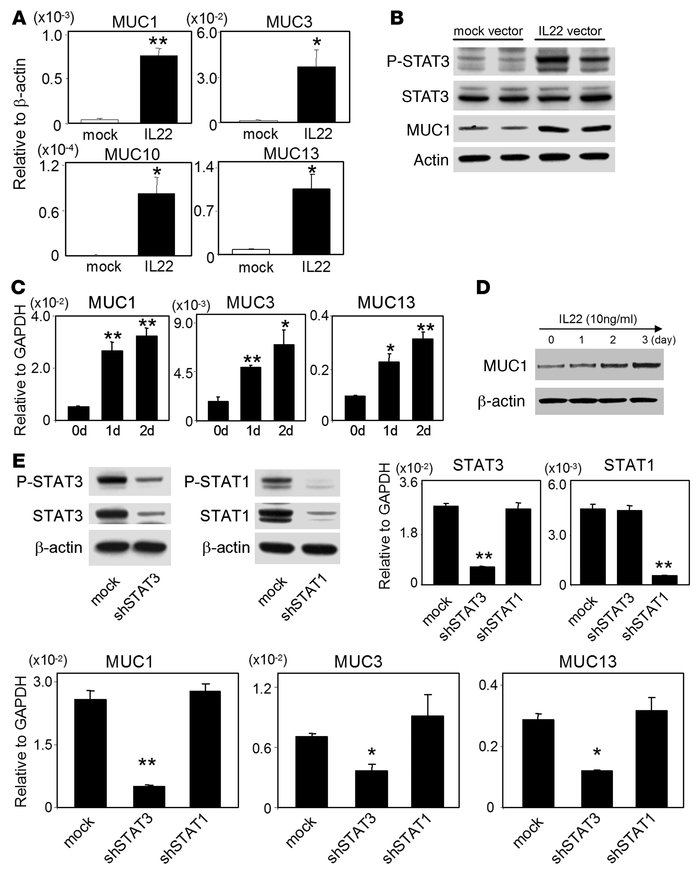 ( and ) CECs were freshly isolated from WT mice that had received local gene delivery of mock (white bars, = 5) or IL-22 secretion (black bars, = 5) vector into the proximal colon. Expressions of MUCs by CECs are shown in . Protein lysates from freshly isolated CECs were subjected to immunoblot with anti–phospho-STAT3 (P-STAT3) or anti-MUC1 (MUC1) Abs (). After stripping the Abs, the membrane was reprobed with anti-STAT3 (STAT3) or actin Abs. ( and ) Average expressions of MUCs by T84 cells stimulated with IL-22 (10 ng/ml) in duplicates of 3 individual experiments are shown in . Protein lysates were immunoblotted with anti-MUC1 Abs (). After stripping the Abs, membrane was reprobed with β-actin Abs. () T84 cells were transfected with a combination of STAT3 shRNA vectors (pKD-STAT3-v2 and -v3) or STAT1 shRNA vectors (pKD-STAT1-v1 and -v2) using Amaxa, which has been shown to efficiently transfect the gene of interest into cells resistant to typical transfection approaches. Cell line with mock vector transfection was used as control. After stimulation of the shRNA- or mock vector–transfected cells with IL-22 (10 ng/ml), the efficiency of the combined shRNA on the silencing of STAT3 or STAT1 expression was confirmed by Western blot (upper left panels) and real-time PCR analyses (upper right panels). Expression of MUC1, -3, and -13 by shRNA (STAT3 or STAT1) or mock vector–transfected cells stimulated with IL-22 was evaluated by real-time PCR analysis. Data represent the average of 3 individual experiments. ** < 0.005; * < 0.05.