Chemically modified mRNA is capable of inducing therapeutic levels of protein expression while circumventing the threat of genomic integration often associated with viral vectors. We utilized this novel therapeutic tool to express the regulatory T cell transcription factor, FOXP3, in a time- and site-specific fashion in murine lung, in order to prevent allergic asthma in vivo. We show that modified mRNA rebalanced pulmonary T helper cell responses and protected from allergen-induced tissue inflammation, airway hyperresponsiveness, and goblet cell metaplasia in 2 asthma models. This protection was conferred following delivery of modified mRNA either before or after the onset of allergen challenge, demonstrating its potential as both a preventive and a therapeutic agent. Mechanistically, FOXP3 induction controlled Th2 and Th17 inflammation by regulating innate immune cell recruitment through an IL-10–dependent pathway. The protective effects of FOXP3 could be reversed by depletion of IL-10 or administration of recombinant IL-17A or IL-23. Delivery of mRNA to sites of inflammation may offer a novel, safe therapeutic tool for the treatment of allergic asthma and other diseases driven by an imbalance in helper T cell responses. 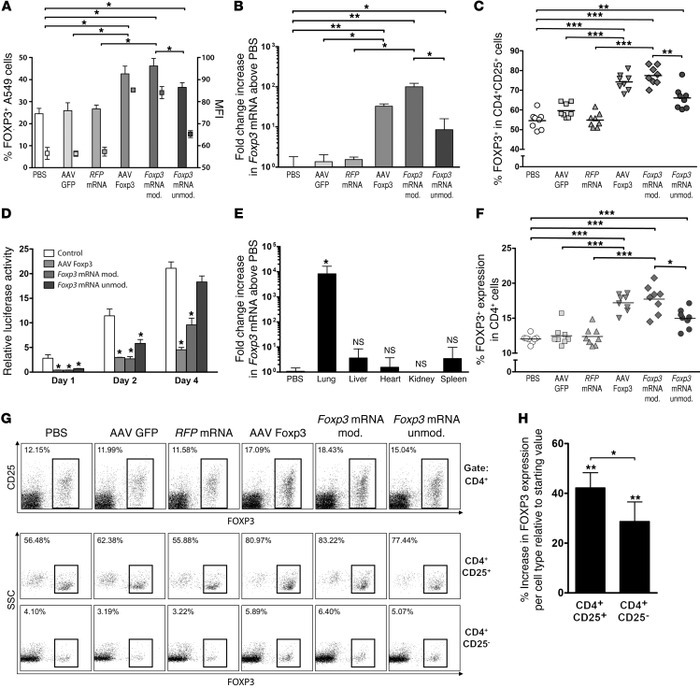 Modified mRNA was delivered to A549 cells or was delivered intratracheally, versus unmodified mRNA, modified mRNA, AAV2/6.2.GFP, AAV2/6.2.FOXP3, or PBS. Twenty-four hours after administration, cells or mice were harvested for analysis. () In vitro transfection efficiency as reported by the percentage of FOXP3+ A549 cells (left -axis) or MFI (right -axis) by flow cytometry. () Cells cotransfected with the indicated vector or control, pNFκB-luc, and an internal reference plasmid were harvested at the indicated time points and analyzed for luciferase activity. () RT-PCR analysis of mRNA expression in lung relative to PBS controls, normalized to ß-actin. () Biodistribution analysis was performed to monitor organ-specific mRNA expression by RT-PCR. (–) Flow cytometric analysis quantifying the percentage of FOXP3 expression in CD4+CD25+ () and total CD4+ cells (). () Representative dot plots showing the percentage of FOXP3 expression per cell type. () Percent increase in FOXP3 expression per cell type relative to the starting value, calculated as: (% FOXP3 in a given cell type for mRNA-injected mice – % FOXP3 in that cell type for PBS-injected mice)/(% FOXP3 in that cell type for PBS-injected mice) x 100. * ≤ 0.05, ** ≤ 0.01 and *** ≤ 0.001 for the indicated comparisons, or relative to PBS-injected mice. Data are represented as individual mice or means ± SD. In vitro studies ( and ) were performed in triplicate and repeated in 3 independent experiments. (–) = 6 mice per group.