Cell therapy has the potential to treat gastrointestinal motility disorders caused by diseases of the enteric nervous system. Many studies have demonstrated that various stem/progenitor cells can give rise to functional neurons in the embryonic gut; however, it is not yet known whether transplanted neural progenitor cells can migrate, proliferate, and generate functional neurons in the postnatal bowel in vivo. We transplanted neurospheres generated from fetal and postnatal intestinal neural crest–derived cells into the colon of postnatal mice. The neurosphere-derived cells migrated, proliferated, and generated neurons and glial cells that formed ganglion-like clusters within the recipient colon. Graft-derived neurons exhibited morphological, neurochemical, and electrophysiological characteristics similar to those of enteric neurons; they received synaptic inputs; and their neurites projected to muscle layers and the enteric ganglia of the recipient mice. These findings show that transplanted enteric neural progenitor cells can generate functional enteric neurons in the postnatal bowel and advances the notion that cell therapy is a promising strategy for enteric neuropathies.

Enteric neural crest–derived NSs in vitro and after transplantation into the postnatal colon in vivo. 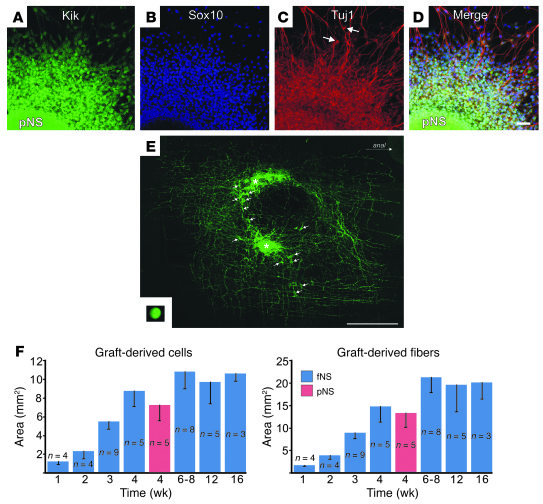